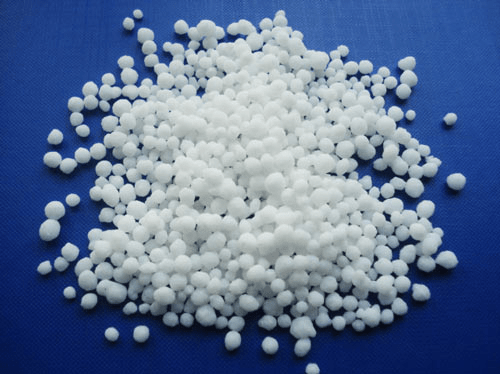 This cropping season continues to provide many challenges, especially issues relating to lack of moisture.  There are however pockets of the wheat belt who had good summer rainfall and a break to the season in April.  Despite a below average growing season to date these areas still have reasonable yield potential providing average rain from here on.  These lucky areas have been applying urea which is at a very reasonable price in relation to the grain price at present.  There is much conjecture about how close to rainfall urea needs to be spread to avoid losses, in this equation there are many variables including temperature, moisture, soil pH and soil texture. So what happens to urea post application?

After Urea is applied to wet soil it goes through several reactions. Firstly the Urea is converted to Ammonium by the enzyme urease, which is naturally present in the soil.  This first process (known as ammonification) normally occurs within a couple days after application. The Ammonium is then converted to Nitrate by soil bacteria (known as nitrification) and this is normally completed within a few weeks depending on soil temperature.  Plants can take up the nitrogen in the form of urea, ammonium or nitrate but will take most of the applied nitrogen as nitrate as this will be the most readily available form.  Nitrate has a negative charge so it stays in soil solution while the positively charged ammonium will bind to negatively charged clay particles.

So what can go wrong? If urea is applied to wet soil without rainfall to wash it in the urea can get converted to ammonia instead of ammonium. Ammonia is a gas and can be lost to the atmosphere, a process called volatilisation.  The ammonia will get converted to ammonium by microorganisms once rainfall occurs (minus what has been lost).  These losses of ammonia to the air are very much increased under higher temperatures (table 1.) and higher pH (table 2.).

Table 1. Percent of surface-added urea volatilized as ammonia at different temperatures and days on the surface. Overdahl et.al 1987 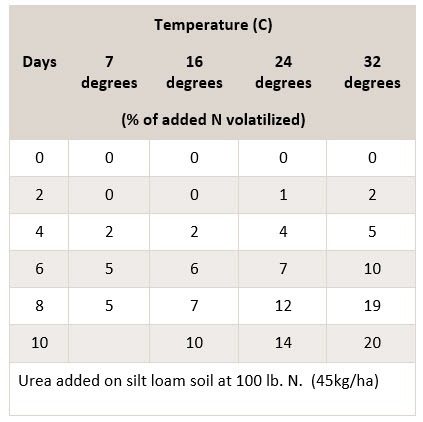 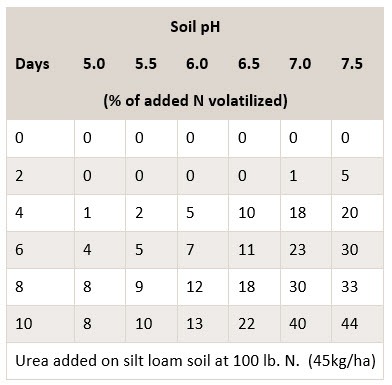 Other losses can occur through leaching of Nitrate nitrogen due to its negative charge not allowing binding to clay particles.  Nitrate Nitrogen can also be lost to the atmosphere if the soil becomes waterlogged as soil organisms, which normally use oxygen will reduce nitrate to gaseous forms (known as de-nitrification).

The two tables from Overdahl et.al 1987, highlight why spreading urea is less risky in the colder winter months and why spreading in front of rain events is critical in the warmer months especially on alkaline soils. 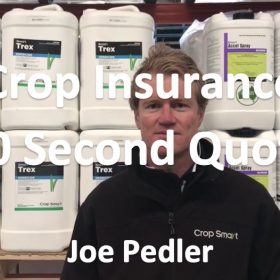